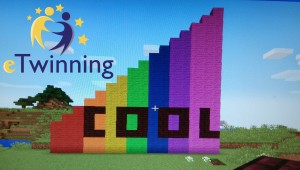 This year, I continued my experimentation with games and learning. I have always thought that a game can better serve my objective to motivate and make real the learning of a foreign language if it takes place with a partner class, possible abroad. This would mean the students shall need the language to interact in the game and proceed to the goal. eTwinning was the easiest way to find another class and teacher with the same idea, so I found as partner Miguela Fernandes from Bathala in Portugal; her colleague teacher of English was looking for a way to motivate the students to speak and use English and she has an ICT programme to carry out. So we started to think of a project to carry out together using technology to collaborate and English as a vehicular language.

The title of our project is COOL: Collaboration online with outstanding learning. The title was the acronym for the the objectives and competencies we wanted to develop with it. First of all we wanted to focus on the development of 21st century skills: collaboration, communication and creativity. We decided to use Minecraft, which the students already used at home in their leisure. Minecraft is a virtual world game where you are assigned a piece of land you can modify and build on as you like. We were particularly interested in the multiplayer game mode offered by Minecraft, whereby several players (students) can interact in the same virtual space hosted on an online server. The students could thus work to the same aim and build together something, so they would need to use English as a common language to , negotiate and agree among them. Building in Minecraft, also stimulated the creativity of the students as they could build just anything they like, and they could make their dreams come true in fantastic locations.

All the activities of the project were centered on the driving question of “What is your ideal school like?”. The students were divided in groups with a more or less equal number of members from the partner countries. The first task was indeed aimed to creating a team collaboration spirit. To this purpose, each team had to share a powerpoint presentation including a page for each member. Another team-up activity was that of creating in Minecraft a logo for the project. This activity had the aim to spur a sense of belonging to the project and further motivate participation; it also introduced Minecraft as a tool to create graphics and artwork.

The next step was to ask each team to set up a free server using athernos.org and decide who was going to be in charge of updating the server on both the Italian and Portugues sides. This was very important as the member of each team could then play, that is continue building, also when they were not online at the same time.

The details of how to work in Minecraft and what to build were discussed in a videoconference with the teams also connected on the Minecraft servers. This videoconference was particularly interesting because the students were also working on the Minecraft servers and there was a nice “getting to know” interaction also in Minecraft world; they chatted and also fought between them, which is exactly what you expect from young people before they can become friends.  Finally, to reflect  on the final product each team prepared a video presenting their Ideal school built in Minecraft. They selected the most relevant screenshots of their building in Minecraft by sharing them on Google Drive and shoot a clip for each picture. For teams 1 and 2 the Portuguese students and for teams 3 and 4 the Italian students were in charge of mounting the video. The teams organized a video introduction to show the complete teams working on the project. Finally, the students answered a questionnaire to evaluate the project and keep track of their learning outcomes.

We tried to design synchronous and asynchronous collaboration opportunities to develop aural and written skills in the foreign language and also to develop awareness of the different constraints and etiquette of the two modes of communication as a way to develop digital competence generally and also a lifelong competence in using both modes.

ESL 1st year curriculum was taught through the project by providing the background grammar, functions and vocabulary to use in the project:

Also other subjects contributed to the project. The Italian teacher stimulated a reflection on school through readings and class discussions; the Technology teacher, instead, used the project to teach how to draw a plan of a room and then of the entire school building. Beside citizenship competencies, the students developed digital competence by becoming aware of the collaboration opportunities offered by the Internet, not only in Minecraft, but also to write a presentation or to mount a video. Building in Minecraft also developed critical thinking: you have a clear picture of what you want to build, but you have to do it using the blocks, a constraint if you want to draw national flags. This skill together with creativity are the basis of entrepreneurial competence. Students learnt to take responsibility for the final product and to apply their knowledge and skills to carry out the assigned tasks, the competence of learning to learn. Technology was regarded as instrumental to the project aims. Minecraft is a game and virtual environment widely used in education worldwide mainly because it allows teachers to simulate environments where their students can explore and discover subject related topics. In our project we used it because it is a virtual environment where the students could collaborate also remotely; instead of having the teacher build the environment, we had students build the school of their dreams. The project was also an experimentation for both schools since it had never been used before in the institutions and by the teachers involved in the project. The experimentation was very interesting since the students proved to be expert Minecraft gamers, yet the teacher were able to steer their learning experience to assure the learning goals set at the beginning were achieved.

I started this project because I wanted to pilot experimentation in my school using Minecraft as a virtual learning environment. When we started the project both me and my partner did not know how to play Minecraft, but we had both read a lot on its benefits in education especially in terms of problem solving and motivation to learning. We relied almost totally on our students knowledge and skills for interaction in the game. This was good because the students realized and appreciated the fact also the teachers were learning and allowed us to show them how to learn and master new situations. The outcomes of the project were very encouraging both in terms of student engagement – about 100% of the participants said the project was very interesting -, and in terms of the learning goals set for the project, namely increasing collaboration skills, encouraging mastery in using English as a vehicular language in communication and developing creativity. In my school the project was presented at the end of the year teacher meeting to encourage other teachers to use Minecraft in their lessons and include it in the Educational Offer of the school.  The strengths highlighted in the presentation were the increased motivation of the students, their empowerment as they master the game very well, the problem.solving and critical thinking it develops. The added value of eTwinning was also stressed which allowed the students to collaborate with other European students who were a stimuli to communication in English.  Furthermore, eTwinning partners were a real audience for their work with which to reflect and interact. Also for the teachers eTwinning provided once again a colleague with the same motivation and vision, willing to learn and experiment new paths to improve learning. The project is duly documented through videos, photos and chat room records in the public Twinspace.

I am a teacher of ESL in Italy and I believe technology can greatly help in proposing my students stimulating situations in which to try out their skills in English. I have decided to write this blog to keep track of my progress and learning as a teacher and of my experience with new tools in my ESL class.